This year The Why Factory will participate to the Architecture Venice Biennale for the first time. It will contribute to two events, which will be part of the Common Grounds exhibition curated by Sir David Chipperfield. - Together with EFAP The Why Factory will launch EU City Program, a manifestation representing Europe for the first time at the Venice Architecture Biennale. With MVRDV it will present a collaborative project ‘Freeland’ to be shown in the Central Pavilion at the Giardini.

Architecture deserves a strong role in European public policies. To strengthen the role it can play in the sustainable, economic and social development of Europe, the European Forum for Architecture Policies (EFAP) teamed up with The Why Factory to initiate the EU City Program. – A ground-breaking series of research projects on the future of Europe.

The EU City Program will be launched at the Opening Conference of the Venice Architecture Biennale, hosted by the President of the Biennale, Mr. Paolo Baratta and the curator of the 13th Architecture Venice Biennale Sir David Chipperfield. In the presence of European authorities, mayors and architects, Winy Maas (MVRDV/The Why Factory) will present the EU City Program, including studies on heritage, population density, economy, landscape, energy, resilience and monitoring in Europe.

An on-going study by The Why Factory titled Porous City will be exhibited at Spazio Punch at Guidecca to exemplify the research approach presented in the EU City Program. The exhibition will present a collection of 676 scale models made of one million LEGO® bricks, that display an extensive catalogue of qualities and potentials of porosity as a European way to urban density.

Freeland:
MVRDV and The Why Factory will exhibit a collaborative project ‘Freeland’. Presented as an animated documentary on a multi-screen surround projection, Freeland explores the prospects of complete liberation of urban planning. It questions whether classical centralized planning is still needed in times of increased individualization and if instead a self-organized city can be imagined. What can be organized individually and when will we need our neighbours? What are the “minimal common grounds” of our developments?

Furthermore The Why Factory will also present the latest AnarCity research developed in collaboration with the Berlage Institute in Rotterdam earlier this year. It is a utopian scenario which takes the idea of bottom-up urbanism to the extreme and presents it against the backdrop of the European city.

‘Freeland’ is a collaborative project by MVRDV and The Why Factory and was made possible by the financial support of the City of Almere. Rotterdam based SYNPLE made the animation. The Porous City showcase has been developed by The Why Factory in collaboration with KRADS, and supported by the LEGO Group.

The launch of the EU City program will take place on Monday, 27 August at the opening of the 13th Architecture Biennale.
The exhibition Porous City will be opened on Sunday, 26 August at 18.00 at the Spazio Punch, Giudecca 800/o, Venezia 30133, Italia.

It will be the second time that The Why Factory participates at one of the largest cultural events this year following its participation at the Documenta 13 in Kassel together with MVRDV. 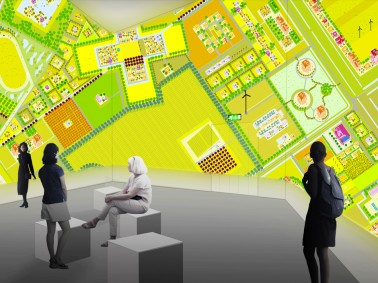 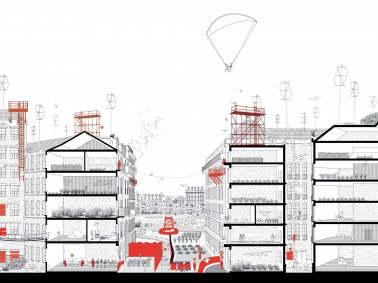 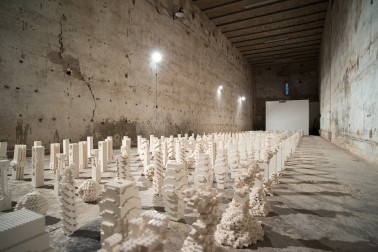