‘Opening the Tower’ exhibition took place at the Faculty of Architecture TU Delft from the 16th of May until the 5th of June 2012. It presented two sets of experiments exploring different aspects of porosity on two significantly different scales. Built with approximately one million white LEGO bricks – 676 towers on scale 1:1000 and 16 towers on scale 1:100 investigated development of possible new relationships between mass and void in large-scale architecture. The material presented at the exhibition was a result of Eurohigh design studio led by The Why Factory through fall semester 2011/12. The studio was developed and supervised by Prof. Winy Maas, Alexander Sverdlov and Ania Molenda in collaboration with KRADS and support from LEGO and Arup.

The investigation, results of which were shown in this exhibition, focused on the search for new principles of organisation of large structures, exemplified with a high-rise building. It was carried out by systematic manipulations of the correlations between private and public spheres, respectively represented in an abstract way by the closed and ‘the open pixel’. Those transformations explored different possible hierarchies, between the open and closed pixels as well as the parts and the whole, by questioning aspects such as reduction of public spaces to the sky lobby and the plinth, the dominance of the core or the repetition of the floors.

All experiments were conducted with the premise that their results should remain abstract, binary and measurable. They addressed solely interrelations between open, closed, empty and full. The task did not define any specific program, nor aimed at achieving an elaborate design. The results can be understood as a set of three dimensional Nolli Maps of non-existent cities, representations of complex urban realities, which articulate relationships between full and empty spaces – in this case volumes. The use of the LEGO brick as the modelling tool allowed measuring the volumes and estimating their capacity to facilitate a potential architectural design. Providing a valid sketch for a further elaboration of the explored relationships into a design proposal.

Modelling played an important role in the forming of this investigation. It served as an experimentation apparatus, which helped to establish different ways of looking at both traditional and CAD modelling tools. It intertwined digital and physical modelling in a feedback loop, which allowed seeing both mediums from unusual perspectives. Digital models explored the composition of the parts, definition of parameters and preset of intensity related to each parameter. [more?] The immediate confrontation with the built result stimulated selection process and definition of new inputs. The scale itself determined the challenge related to the structural aspects addressed through the physical tests. The final output should therefore be seen as a materialisation of a protocol of defining and adjusting the parameters.

26 EXPERIMENTS, SCALE 1:1000
‘26 Experiments’ display a form-exhausting collection of 676 models presented as a grid of 26 linear iterations. The grid organizes models along the x-axis according to the percentage of their mass within a given envelope (10%-200%), while the y-axis assembles them according to the size of their ‘the open pixel’ surface. This extensive catalogue of possibilities served as the first step to a more precise parameterization of the process and a deeper exploration of selected porosity aspects executed in 16 large models.

16 EXPERIMENTS, SCALE 1:100
’16 experiments’ show a follow-up, more detailed investigation oriented towards forming specific relationships between mass and void with a preset proportion of fifty percent each. The relationships formed by the introduction of measurable parameters and systematic transformations were applied to a given envelope of 50m x 50m x 250m. The results represent the first step in exploring new ways in which porosity could define novel building typologies, which could allow for a deeper penetration of the built structures with the public sphere in the vertical and volumetric sense.

The Eurohigh design studio has been developed in collaboration with KRADS and support from The LEGO Group and Arup. 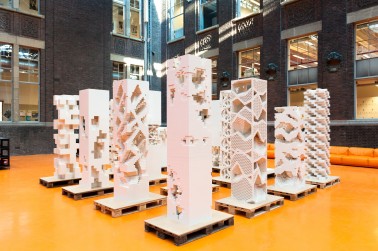 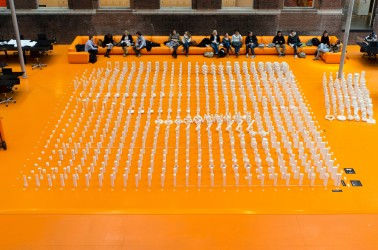 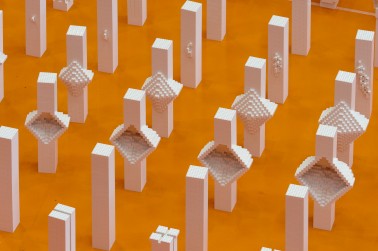