Pig farming used to be part of urban life. Today it has become an industry that is located outside of our cities, invisible and unrecognized. This project explores whether we can bring pig farming back to the city, making it a visible, transparent, ecological and natural part of our urban life. Can we bring pigs back to the city?

With an average surface of 2m2 per pig, one pig farm covers a total of 6.400m2. This is conform biological regulations and includes a slaughterhouse, fodder storage, biogas installation and offices. The farm offers stable places for pregnant sows, stall sows with piglets, weaning pigs, meat pigs and two boars.

The Hague needs 65 pig farms to cover the demand of pork meat based on the current annual average consumption of 41kg per person. If the Dutch consumer would change to a healthier diet recommendation, 7,6kg of pork meat would be sufficient. This would reduce the amount of pigfarms needed for The Hague to 12.

The Stack
Stacked stables create a farm with a smaller footprint and a smaller dome. Thus forming a compact sculpture and new icon for the Binckhorst and The Hague.

Pigs District
Spread out over a part of the Binckhorst, stables are integrated with their surroundings. The neighbourhood turns into a pedestrian and pig zone. A zone with green, containing trees and bushes, prohibit the stench and sound nuisance. The pig stables literally become a part of everyday city-life. The neighbourhood’s prime objective is pig production. Other buildings can be re-used as slaughterhouse, fodder storage, butcheries and restaurants.

The Office
Pig farming can also be made possible by using existing buildings. An empty office building for example is highly suitable to house a pig farm. The column grid makes it possible to work with an open and flexible floor plan wherein the pigs can be housed in bigger groups. A sufficient amount of elevators are present for transportation. By attaching ramps to the outside of the building, groups of pigs can move from one floor to the other. A butcher with slaughter facilities is located on the ground floor. Nearby buildings function as restaurants and special shops selling fancy products. 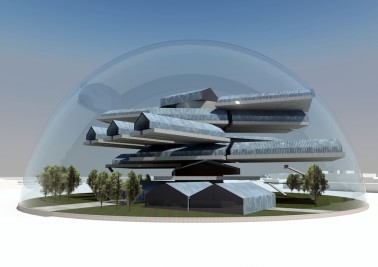 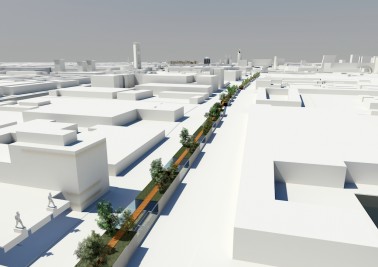 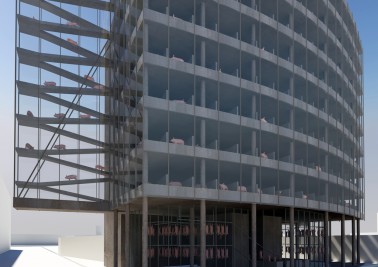