Urban villages are a common typology in many Asian cities. The dense quarters in Shenzhen, the hutongs in Beijing or the kampungs in Jakarta all are part of this urban phenomenon. Where Asian cities grow and become more dense, the urban villages are under pressure. They are being demolished at an increasing pace. To replace them, large fields of repetitive, monotonous blocks are being built. The new blocks may answer the need of comfortable apartment space, but they lack the social coherence, spatial diversity and flexibility that the complex urban villages can provide.

The VerticalVillage project proposes an alternative. Dense urban villages, stacked to allow for the necessary height, informal and flexible, individual and evolutionary. The vertical village allows for flexible use. It includes open public spaces, organized by tenant communities. It growths evolutionary, reacting to the needs of its inhabitants. Individual units can shrink or extend over time or change their function. It combines the quality of a village with the density of the city.

In the studio, five villages were planned on the scale 1/500. The designs are less abstract and show possible real versions of vertical villages. Each design is based on a different hypothesis, related to lifestyle cycles, rural romanticism, multiple natural environments, a collective void or 3-dimensional diffusion. Each design illustrates the unpredictable results of evolutionary vertical growth. The designs propose different growth protocols and structural principles.  The diversity of the designs lie both in the overall configuration and in the detailed living spaces. 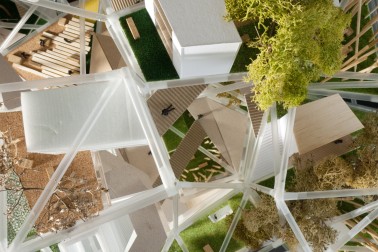 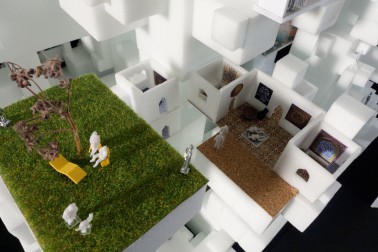