Today MVRDV, The Why Factory and the JUT Foundation for Arts and Architecture opened the fourth edition of the exhibition series “Museum of Tomorrow” in Taipei. Under the title “The Vertical Village” the exhibition explores the rapid urban transformation in East Asia, the qualities of urban villages and the potential to realize this in a much denser, vertical way as a radical alternative to the identical block architecture with standard apartments and its consequences for the city.

The exhibition consists of analytical research, a grid of models, various movies, a documentary and animations, two software packages and a 6 meter tall installation of a possible Vertical Village developed by MVRDV and The Why Factory. Visitors can design their ideal house and compose their own Vertical Village with parametric software. The exhibition is located in Chung Shan Creative Hub, Taipei and open from 8th of October to 8th of January 2012.

The pressure on the East Asian cities has lead to an increasing urbanization and densification during the last decades. It has made way for the construction of giant buildings, mostly towers, blocks and slabs. A ‘Block Attack’ that gradually replaces and scrapes away the more traditional low rise, small scale, often ‘lighter’ types of architecture and urbanism: the Hutong in Beijing, the small wooden houses in Tokyo, the villages in Singapore, the individual houses in Taipei and other East Asian cities. These urban villages form mostly intense and socially highly connected communities, with enormous individual identities and differentiations. One can speak of urban ecologies, communities that have evolved over the course of centuries. Their faceless replacements packed with identical apartment units offer a Western standard of living at an affordable price, but at the expense of differentiation, flexibility and individual expression.
Is there an alternative to this process? Can one imagine a new model for the development of East Asian cities? Can these areas be densified in such a way that the qualities of the traditional village are preserved? The exhibition offers an alternative, a contemporary Vertical Village – a three-dimensional community that brings personal freedom, diversity, flexibility and neighbourhood life back into East Asian – and maybe even Western – cities.

In the fourth edition of the Museum of Tomorrow, MVRDV and The Why Factory analyse, explore and deepen this vision, with the help of the Berlage Institute and many other contributors. The exhibition located in Chung Shan Creative Hub, Taipei, features a 6 meter tall installation and a variety of analytical models and research elements. Visitors will be able to design their ideal house with an interactive platform, “The House Maker”, and develop their Vertical Village with parametric software – a Grasshopper scripted Rhinoceros model, developed by MVRDV and The Why Factory.

JUT Foundation for Arts and Architecture publishes the Chinese edition of ‘the Vertical Village catalogue. NAi Publishers is publisher of the English language version which will be published January 16th 2012. The 528 page volume contains the ample research made comprehensible with countless colour illustrations. It features detailed case studies for Tokyo, Beijing, Shanghai, Taipei, Djakarta, Seoul and Bangkok, interviews with among others Winy Maas, Alfredo Brillemburg and Hubert Klumpner, Lieven De Cauter, Peter Trummer and families living in Taipei.
The exhibition and publication has been made possible with the generous support of JUT Foundation for Arts and Architecture, Delft University of Technology, The Why Foundation and the Netherlands Architecture Funds. 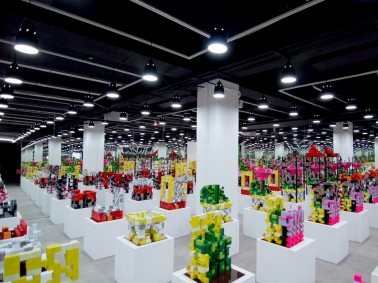