The Village Maker is a systematic attempt to explore abundant possibilities of exciting, vigorous, community-base urban villages that are structurally safe, economically feasible and sustainable. This Master class/ MSc2 Workshop was staged at the Berlage Institute Rotterdam between 3 and 12 June 2010. It resulted in 36x 1:100 models and a study on the software ‘Village Maker’. Multiple experts and tutors worked together with the participants to set the parameters: from structure, climate, energy, access, collectivity, and cost-efficiency.

The program started with an opening conference, mid- and final reviews, and ended in a post-production that will result in an exhibition at the Museum of Tomorrow in Taipei and coming T?F publications. From 7 October to 20 December, the Village Maker is exhibited in the Oostserre, BK City, TU Delft.

Urban village, especially in Asian metropolises and in many developing countries, is seen today as the last resource of communities in the city. Apart from social issues, urban village reserves highly interesting spatial characteristics: compactness, density, intermingled infrastructure, semi-public zones, and other qualities that a generic city does not have. On the other hand, an urban village may generally lack proper sanitation, lighting, energy, safety and structural stability.

In the past decade, in response to the pressure caused by the growing population, many large buildings have emerged in numerous Asian cities, and they have gradually replaced those traditional, independent, and organic urban landscapes.

With this master class, we would like to explore the possibilities of extending the notion of a village to a city construction, by experimenting what can happen if we take into account structure, light and air, energy, access, cost efficiency, and community separately and altogether. Would this be able to help the village’s status to exist and to flourish?

We experimented on the reactionary element of village building:
How is a new layer of development responding to an existing one? How can an existing layer adapt to the new layer? What kinds of negotiations are possible?

The Village Maker aims to serve as a tool for government, planners and communities to retain a certain characteristic of the villages yet with the ability to position them within the globalized city.

All experts in coordination with the tutors worked together with the participants in determining the six starting points.

Models
The 36 models show the evolution of parameters with 6 different colours representing each group. We worked with 25,200 cubes in total, with 12,240 multiple parts.

The models are building up. Each model (starting with 200 cubes) was transferred to another group and added a layer of 200 cubes until it reached 1200 cubes. 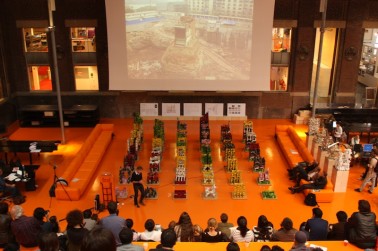