As architects and planners we design for people. Human needs have always defined what we imagined, what we drew and what we built. Architecture and urbanism have simply been fulfilling a very old directive: "Be fruitful and multiply, and fill the earth, and subdue it…” That is what we did by building new cities, highways, harbors and bridges. Today climate change casts shadow of doubt on our civilization being so self centered. We are told that the world has been abused by us. By simply exploiting it, we seemingly missed the fact that there is more to it than just being our pantry… However, can ‘Green’ ideology, as we know it, embrace the whole complexity of that conflict? Can eco-city, as we know it (Masdar), be a sufficient solution? Biodivercity explores how both architectural and urban design could facilitate meaningful relationships between humans and other species.

It takes off from the Deleuze and Guattari’s thought that the opposition between humans and nature does not exist: human species within the biosphere is one among many? We look for new intimacy between human beings and nature that we can project today, as once Joseph Beuys did. We envision new engagement with natural cycles spreading beyond existing agriculture. We design a new city embracing a democracy of people, animals, micro-organisms and minerals. What will be the city that animals would love.

Biodivercity aims to answer the question: how can we change our cities in order that animals and humans can start to live next to each other in extraordinary new ways? The history of the city is a history of human conquer on world ecosystems, it has been an anthropocentric driven development, which often includes serious threats to nature’s species. As the city expands now swiftly to all corners of the world, the question of coexistence with all animals suddenly becomes urgent and exciting simultaneously.

Biodivercity also aspires to arrive to a strategy that involves market forces and design in combination with the empowerment of people to be able to untapped new opportunities for co-existence. To achieve a tangible and practical result that is able to become attractive to the citizens we propose to focus this project on the production of the widest range of innovative products, that in combination with each other help to make the city more animal friendly.

Europe is chosen as a case study to test the ideas and devices devised in the studio. The continent presents a highly artificial territory where urbanization, industrial areas, polluted lands and extensive use of agriculture affect the life of animals displace them or shrinking their population. From this survey several territories are marked by the studio that deserve better attention: the shrinking of wetlands, the effects of monocultural agricultural production, the challenges migrating birds encounter in a territory in constant artificial mutation. Infrastructure plays also a mayor role in shrinking biodivercity as roads, ports, dams become obstacles for migration and reduce the space of adaptation to climate and resources. Simple bridges between these patches might not be enough so alternative models of intensification are envisioned. Also as certain animals that have adapted and become urban or increase their population as human garbage increases are many times consider pests, how can design bring a new perspective to this species that accommodates their life cycle in a better position for vs the city, how some species can actually play a role in the cleaning of the environment.

The ideas go further than expected. To achieve co-existence of many species including that of predators requires extensive territorial background as biomass requirements go exponentially high. Should we also consider a feeding system for animals to be able to diversify and intensify a territory asks also another team.

To obtain a better and precise picture of the effects of this products we are currently working on its impact analysis. By incorporating the latest theories of biodivercity we are able to draw likely urban scenarios that make visible the interaction between the products and their impact on the territory. Our last column of investigation aims to develop further a software that calculates how much biomass is required per animal specie based on calories, food webs and space implications, so we able to check how much space each species requires. Based on these calculations we analyze which kind of habitats are more beneficial for each species and influence in return the design of products. This is tested in a 100 x 100m cube, which analyze and put into test the concepts of products and strategic designs into one collective framework. The microsystems evolve into medium size systems, the possibility of hosting a wolf, a falcon or welcoming migrant birds is put into the test of space, time and also energy. 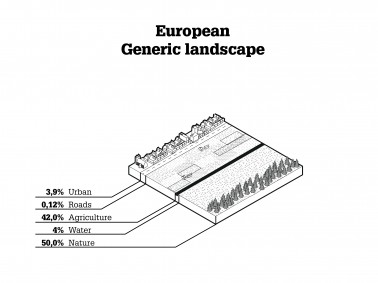 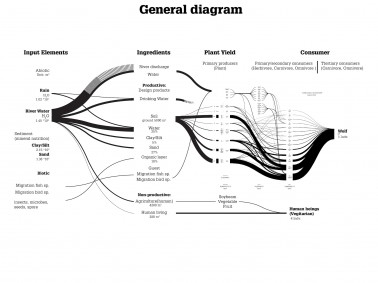 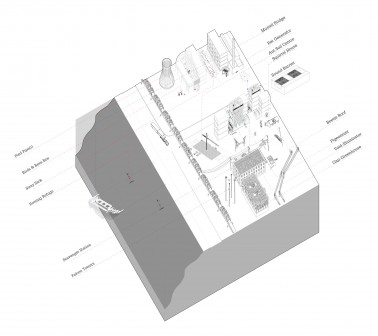 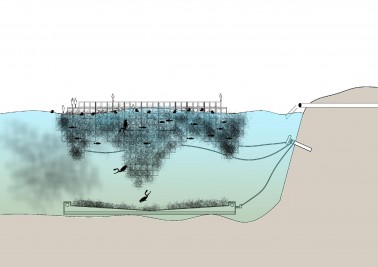 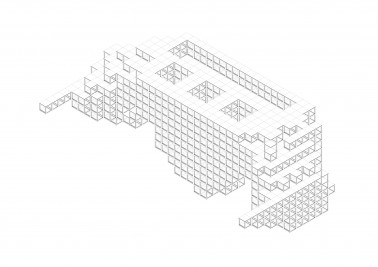 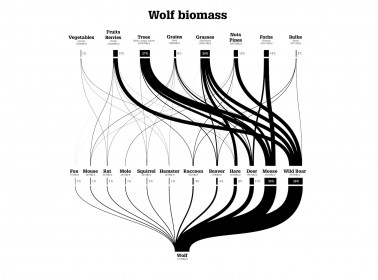