Under the title ‘The Vertical Village – Individual, Informal, Intense Taipei’ the exhibition explores the rapid urban transformation of East Asia, the qualities of urban villages, and the potential to develop much denser, vertical settlements as a radical alternative to the identical block-like architecture of standardised units and their consequences for city life. The exhibition, which itself is designed as an urban village, consists of analytical research, various documentaries and animations, two software tools for urban development, and a scale model of a possible Vertical Village developed by MVRDV. Visitors can design their ideal house and compose their own Vertical Village with the parametric software packages.

The pressure of rural to urban migration on East Asian cities has lead to increasing urbanization and densification over the last few decades. It has made way for the construction of gigantic buildings, mostly towers, blocks and slabs. A ‘Block Attack’ that gradually replaces and scrapes away the more traditional low rise, small scale, often ‘lighter’ types of architecture and urbanism: the individual houses of Taipei, the hutongs of Beijing, the small wooden houses o Tokyo, or the villages of Singapore and other East Asian cities. These urban villages form intense and socially connected communities, with enormous differentiation and individualised identities. One can speak of these as urban ecologies, communities that have evolved over the course of centuries. Their faceless replacements, packed with identical apartment units, offer a Western standard of living at an affordable price, at the expense of diversity, flexibility and individual expression. Is there an alternative to this process?

Can we imagine a new model for the development of East Asian cities? Can these areas be densified in such a way that the qualities of the traditional village are preserved and enriched? The Vertical Village exhibition offers an alternative to the ‘Block Attack’, a contemporary Vertical Village – a three-dimensional community that brings personal freedom, diversity, flexibility and neighbourhood life back into East Asian cities. This theory is tested with a case study on a site in Taipei’s ZhongShan District.

And what could the Vertical Village concept – in principle developed as proposal for the future development of Asian cities – contribute to the discussion in a European context? Could exhibiting the Vertical Village concept in Hamburg thus help to liberate our sometimes limited European cities, to add more diversity, programmatic richness and flexibility to our cities, and to allow for more individual and collective initiatives and creative development models?

Artists from Taiwan have contributed work connected to the theme of the Vertical Village: ‘Arcadia in the Back Alley’ by Hsie Ying-Chun, ‘City Cabin’ by Hsiao Yu-Chi and ‘Whispers of the City’ by artist collective Interbreeding Field. Along with the exhibition a catalogue of ‘the Vertical Village’ will be published in German and English. The 100 page volume contains the extensive research that took place, made easily understood with countless colour illustrations. 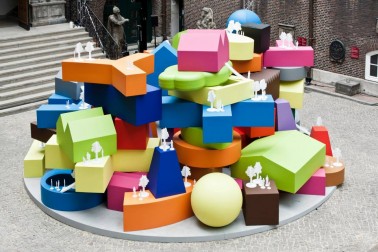 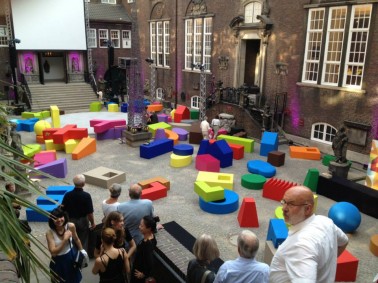 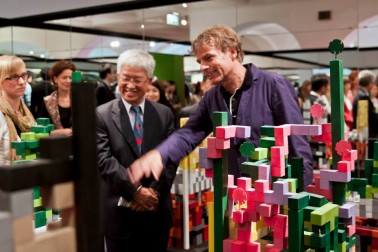 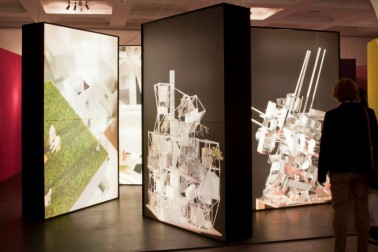