This studio zooms into the architecture of a city that is built upon speed and direct accessibility. What kind of architecture can accommodate speed and performance of high speed vehicles? How is organization and apartment layout change according to the different vehicles used? What would a neighbourhood look like if the only means of transport would be a vehicle reaching 500 kmh/h?

The studio is a negotiation between the time needed to travel and space occupied by structure and infrastructure. Using the data produced on the 4’ City Details 1.0 studio, a selection was made to scale the data of Rotterdam into a 250 people apartment block. The model developed generates and evaluates different options that optimise either the time needed to travel or the volume occupied by the program. There is no priority on the requirements. The chosen model is the most successful negotiation between compactness, minimum travel distance and capacity of infrastructure.

The students were asked to minimise the time needed to travel, minimise the space occupied by structure (closest to neighbour) & infrastructure and to create door-to-door accessibility for all inhabitants and users.

The model is generated in Grasshopper translating the vehicle’s performance (speed, acceleration, inclination, turning radius, dimensions) in the volume and length of the infrastructure. Afterwards, the volumes are generated as the program input and added on the script to be placed on the point surface generated in the first step. For the initial model the scenario of leaving your house towards an exit point is used. 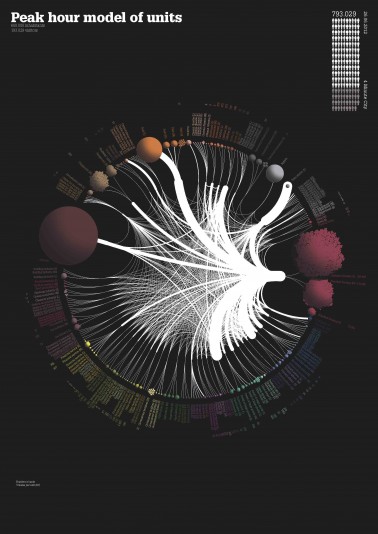