Hong Kong is one of the most densely populated cities in the world. Almost 7 million people live in an area of 1,099 km2, in small apartments in high-rise developments. The city has the highest density of freeways and public transport in the world; still its green spaces are relatively vast. Despite its good financial standing and wealth, the city has been facing fierce competition from Singapore, Shenzhen, Shanghai and Seoul, since the opening of its borders. Shenzhen and Shanghai have become important financial hubs of South East Asia; the production of goods has moved further inland of the Pearl River Delta; the middle class moves out to Shenzhen in hope for a higher quality of life. What is left is a densely populated urban area geared towards commercial and retail facilities that lacks high-quality public spaces, cultural institutions and a sustainable approach to building.

What will Hong Kong’s future role be? What is it that makes Hong Kong special amongst Singapore, Shenzhen, Shanghai and Seoul? Could its density be an asset for becoming the most sustainable city in the world?

The film ‘Hong Kong Power’ proposes a series of visions for the future of Hong Kong. It analyses the city’s strengths and weaknesses and identifies its potentials. Instead of regarding the city’s spatial restriction as limitation for further urban development, such restriction could create inventive solutions, as for instance the vertical extension of hills to enlarge the ground space. A new housing typology or approach to residential design could help reduce migration to Shenzhen or other cities. A combination of living, working, retail and culture along the waterfront could facilitate creating an attractive marina development. The implication of new building guidelines, such as the creation of canopies and increase of shaded areas could counteract Hong Kong’s need for cooling and therefore reduce its high energy demand. 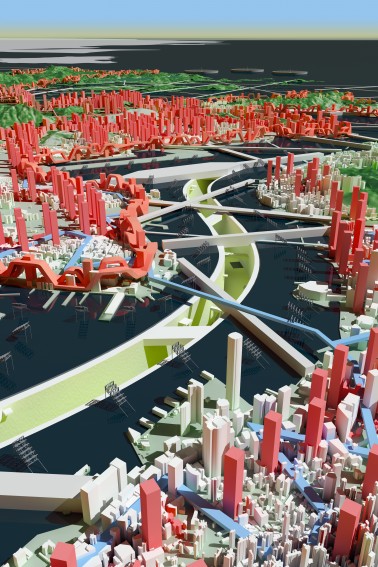