The JUT foundation from Taipei, Taiwan has commissioned MVRDV and T?F to curate the fourth edition of the exhibition series 'Museum of Tomorrow'. Under the title 'VerticalVillage©' the exhibtion will explore the possibilities and potentials of informal structures and urban villages in Taipei. The pavilions for the exhibition form part of the research and are designed by MVRDV.

T?F and MVRDV are executing the research and concept proposals for the VerticalVillage© together with teachers and students of the Taiwanese Universities of FuJen,  Tamkang, Tunhai and the National Chiao Tung University. This week, MVRDV and T?F have been to Taipei for the official launch of the project and intensive discussions with all students and teachers on the content of the project. In July, the team will go back for a workshop where one design of the VerticalVillage© will be made. This will form the core of the exhibition, which will be opened in November 2009 in Taipei. 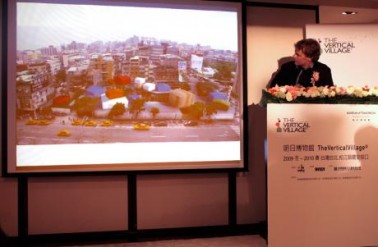