Last Friday (15 Jul 2011) exhibition –'Cinema of the Future. Cinema and Urban Public Space.' featuring results of T?F workshop opened at AEDES Network Campus in Berlin. 'Can We? Make More Than A Cinema!' workshop presented at the exhibition took place in February 2011. Twenty-five students explored how the art house cinema typology can achieve a new function and integration in the social fabric of an urban neighbourhood, exemplified by a specific site in Berlin-Wedding. At the same time in a very short and intensive design session the workshop served as an experiment on the design process and the changing role of the architect that requires negotiation skills more than ever.

‘Can We? Make More Than A Cinema!’ was a secon successful international architecture workshop on the cinema of the future and its role in urban public space. The series started in 2010 on the occasion of the 60th anniversary of the International Film Festival Berlin. The first workshop ‘Berlin Motion’ with the University of Applied Arts Vienna, led by Prof. Wolf Prix, analysed the interdependency between architectural and urban space and the moving image. 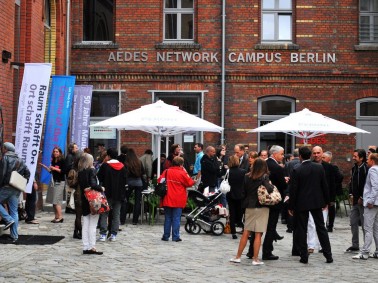