Winy Maas reflects on the future of Barcelona

Winy Maas Prof. Ir. Ing. FRIBA HAIA is one of the co-founding directors of the globally operating architecture and urban planning firm MVRDV, based in Rotterdam, Netherlands, known for projects such as the Expo 2000 and the vision for greater Paris, Grand Paris Plus Petit.

He is also professor at and director of The Why Factory, a research institute for the future city, he founded in 2008 at TU Delft. He is currently IAAC Master in City & Technology Senior Faculty. Since 2013 he is Visiting Professor at the University of Hong Kong, before that he was among others Professor at ETH Zurich, Berlage Institute, MIT, Ohio State and Yale University. In addition he designs stage sets, objects and was curator of Indesem 2007. He curates exhibitions, lectures throughout the world and takes part in international juries. 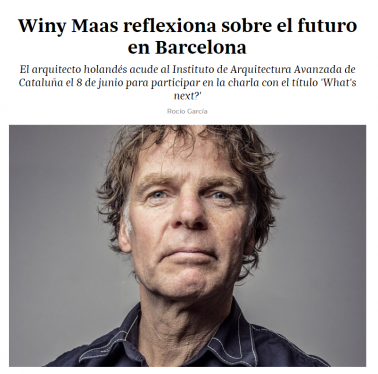