The New Old is a collaborative research between The Why Factory and the IaaC Master of City and Technology that explores how we can manage all we leave behind by analyzing what does Old mean and what will become Old in the next years. By understanding its location, size and timeline we envisioned its future -by actions of removing, reusing, relocating and remembering- so we could start answering the question: What will be the New Old and how will it look like?

The New Old: Rethinking the future of the past – IAAC Blog

In order to define what will be the New Old of the near future, we must understand what makes things become Old. We have to look into our past to understand what are the layers we are on top of. What happens with the past and what do we do with it? In the contemporary context – as humanity develops- we need to meet our demands. There is friction created between our endless growth and the limited sources of our planet. We are in a crisis of choice and the awareness of a place -for a replacement that goes beyond orthodoxy- is the ultimate tool for changes. Is It about how much space and cost of opportunity could be created in this process of understanding the past. As we keep evolving, do we keep leaving traces? and how do we handle it? in the context of the lifespan in a timeline, things constantly become old.

The Atlas Of The Old

We made a list of all the things will be becoming Old in the future. After creating this list, we filtered them by choosing the ones that had more potential to be analyzed. Then we have categorized them, first in time, defining 4 different bins from a large time scale to the more recent one. 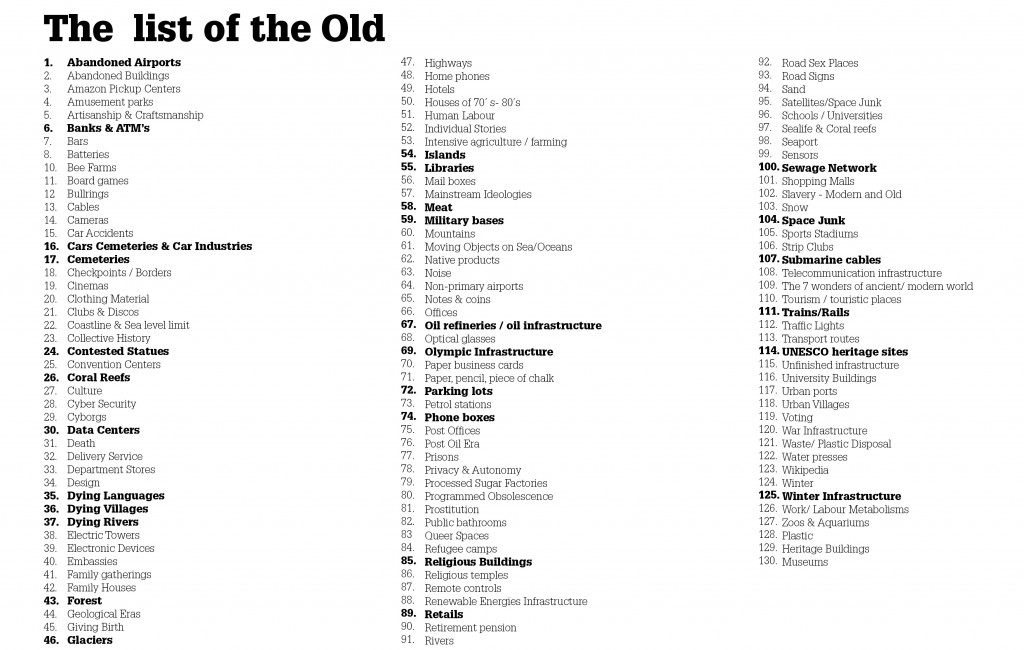 We were interested in comparing the trends of the topics through time, it means the impact of each item and be able to locate all of them in the same graphic. We define de X axes as time, but the question was how could we define the Y one. In order to do that we have defined the Y axis as the Historical Trend Value in percentage. That means that we show the volumen, the quantity, the amount of usage by society or the point of development of the topic traduced in percentage through time.Each item reach the 100% in the moment of history where they have had their momentum. 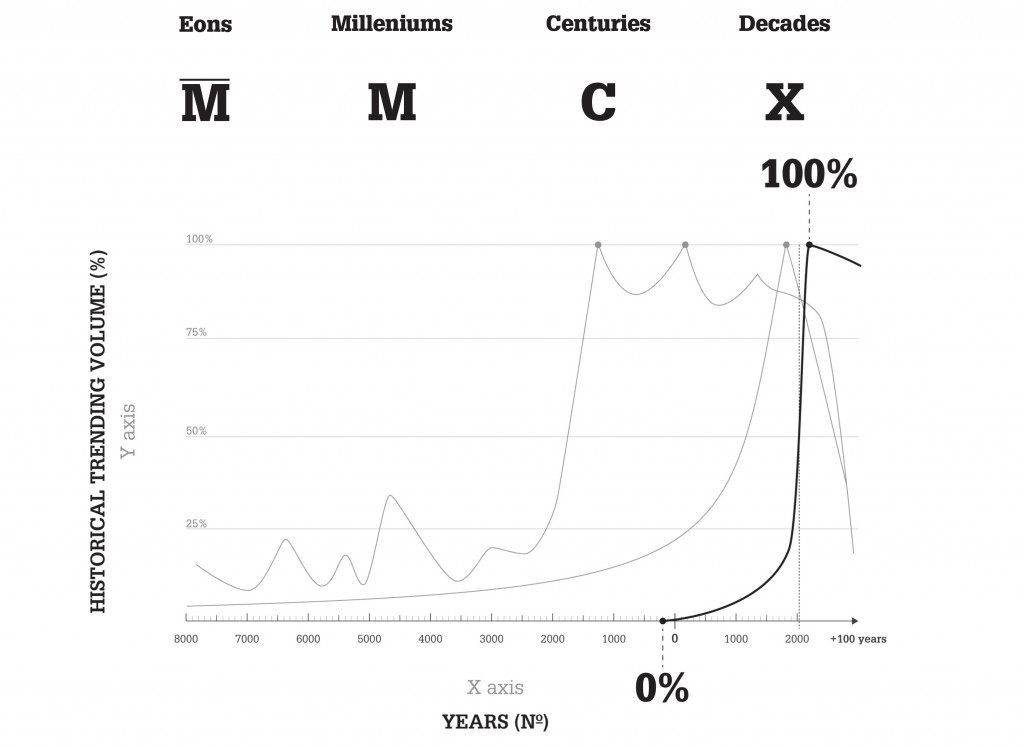 Timelines of the New Old

With this information we could frame the Timeline for each concept.For instance, when there was more ice on the planet?, when did people use more the car? or when  did retail achieve the maximum market value in history?Through this methodology we are able to compare all the topics with a systematic approach, even if they don´t bellow to the same nature. This allows us to use this common metric and add to the timeline inspite of the topic.

After this categorization, we defined a new type of categorization regarding the scale of each topic: From XL to S. The aim was to map all the future New Old to be aware of its size and amount of space that they will be occupying. In that sense, the comparison between scale and size was represented by how many Italies this Old would become, since Italy has always been the representation of obsession of protection.

From XL to S

As a result, we obtained an Atlas of the New Old of the Future where we could represent the impact of the future obsolescence of things.

The Atlas of The New Old

What could be done with the old? If we could visualize our reality without these new olds, what would be the impact of their absence? In order to comprehend the magnitude of this void, we firstly blacked out the objects on their existing context and pointed out the amount of space they globally occupy.

Subsequently, our idea was to reinterpret the existence of the old, by giving it back some meaning, whether to the object itself or to the related space. Based on that, we introduced the concept of the Re-s: a prefix that means “back” or “again”. After identifying a list of possible approaches, we narrowed down to the four most likely scenarios of imagining a future for the new old. In order to define a clear methodology, we applied the same four strategies to all the olds we have researched about. 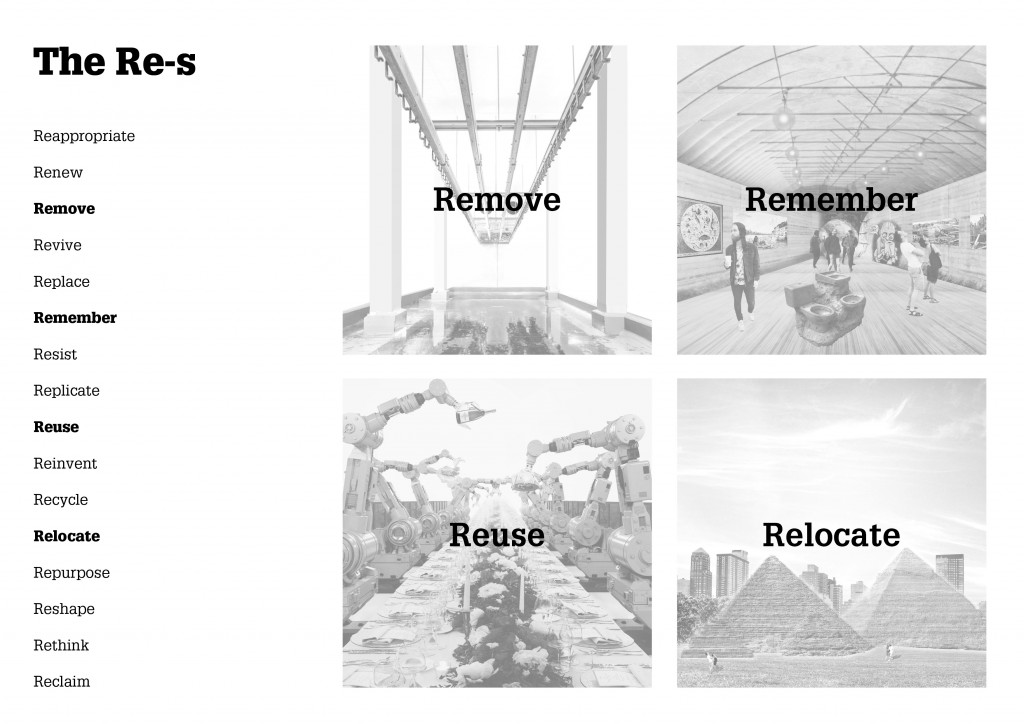 The first Re we explored was the idea of Removing, in a sense that once you erase the object, you bring back the old memory of how the space used to be without it, reestablishing its original state. This action brings the reflection of what is the importance of this old, and if it should continue to exist and play a role in our everyday lives. If not, should it be remembered? Do we want to keep the memory of it in its existing location or transform it into an exhibit?

Once the object loses its function, another option would be to reuse its infrastructure or materials for a new purpose, in line with the new global necessities. According to Lavoisier, nothing is lost, nothing is created, everything is transformed. Lastly, we reflected on whether this object still belongs to its original place. Thus, could we relocate something that has become old in order to give it a new meaning elsewhere? 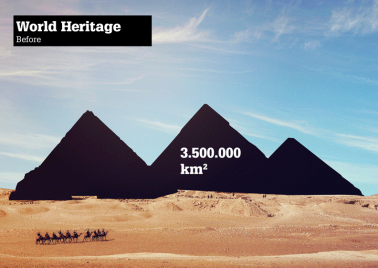