In the Spring 2020, The Why factory will initiate a research in collaboration with AMS Institute (Amsterdam Metropolitan Solutions). Witihn this framework, the MSc2 studio of The Why Factory will explore the urbanism(s) capable to accommodate hyper population derived from massive incoming flows of migrants.

According to some researches, if the World borders would open and populations could move freely, the Netherlands should be able to host a population of 54 million people.

How would the country look like? What would Amsterdam in particular look like if its Metropolitan Region was to be populated by 20 million people? How to design hyper density? How can landscape support such pressure? Can we design a software capable to anticipate how Amsterdam will be?

Together with the AMS Institute, the Why Factory students will research the urbanisms resulting from applying such scenario of massive population growth, from the scale of the Netherlands to the scale of Amsterdam. How to build housing that fulfils the needs of the city’s residents and meet such density requirements? How to make the city still livable? What mobility will be like in such a scenario? What does Nature have to say?

Urban density is the best tool to contain CO2 emissions, but while building the dense city we shouldn’t forget the citizens who will inhabit it. On that score, during the studio, students will build a 200 m2 physical model at the AMS site, containing a myriad of ideas for the citizens of Amsterdam to test. The giant will be exhibited at a public venue in the city and will serve to activate a public debate about the future of the city amongst residents, students, policy makers, designers and all agents involved in the fabrication of the city.
Students will need to travel to Amsterdam for studio sessions at AMS on a regular basis (most likely once a week). 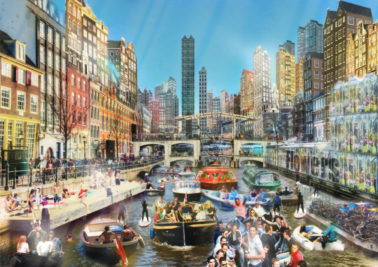