A’A’ / L’Architecture d’Aujourd’hui, the French/English bimonthly welcomes guest editors MVRDV and The Why Factory on the theme of “Uncertainty”. A collective effort of 70 articles by writers such as Beatriz Colomina, Aaron Betsky, Alain de Botton, Justin McGuirk, Jenny Holzer, Kobas Laksa, Markus Miessen, Toshiko Mori, Farshid Moussavi, Saskia Sassen, Mark Shepard and many others. ’A’A’ is out now in stores and can also be ordered atwww.larchitecturedaujourdhui.fr.

“By their very existence, magazines are extremely short-lived or time-based. As guest editors, we want to use the exactly that fleeting momentum and to show this in its purest way. As a frozen moment in time and a true slice of NOW! […]It thus uses this momentum as an attempt to describe the current context of the production of architecture and to grasp the present situation. To investigate and show the the broad spectrum of influences, opinions, visions, the battlefield and the actors related to the making of architecture and the future of the city as a range of voices.”

The table of content in order of appearance:
Why Uncertainty? by Winy Maas | Liquid times: Living in an Age of Uncertainty by Zygmunt Bauman | What is utopia today? | Atomized architecture by Theo Deutinger, Federica Vazzana and Catarina Dantas | Whatever happened to architectural criticism? It played it safe! by Alexandra Lange | The un-read. The mismatch between theory and practice by Hilde Heynen | What is the role of architecture-magazines today? by Beatriz Colomina and Cyrille Poy | How we promote architecture by BIG, HOK, JDS, MAD, Mecanoo, MVRDV, Jerde Partnership and Tectonics | Mies Media by Beatriz Colomina | The fashion of architecture by Felix Burrichter | We are lost in translation by Annaik Deceuninck, Ania Molenda and Emily Waugh | The dictionary of Vagueness by Aaron Betsky, Geoff Manaugh, Hans Ibelings, Jonathan Glancey , Mark Shepard, Martien de Vletter, Powerhouse Company, Piet Vollaard, Roemer van Toorn, Saskia Sassen and Toshiko Mori | The value of value by John Thackara and Klaas Hofman | We need Archinomics by Ronald Wall | The value of geography by Michael Najjar | Mon portable me met les nerfs en pelote by Harmut Rosa | Our impact by Ulf Hackauf and Pirio Haikola with Wieland–Gouwens | The Green Dream by T?F | Les points clés de la durabilité en action by Mohamed Benzerzour and Franck Boutté | The End (or the new beginning) by Jan Knikker | Why do we not want to understand the future? by Nassim Nicholas Taleb | The edited crisis by David McCandless | Dare to look back by Jan van de Pavert | Be prepared! Planning for the unexpected with Willem Hoekstra | The space for being safe | How do you survive? by Marie Douce Albert | Who do you want to be? by Powerhouse Company | What if they would have been realized? by Gustavo van Staveren | Architecture as a tactic with Markus Miessen | The Crisis of the future image by Tihamer Salij | Be more! by Winy Maas | (use)less to (use)more by Basurama | Optimism is not enough with Kobas Laksa | The happiness filter by Luxigon | La necessité d’une île (and the case of SimpliCity) by Jeroen Zuidgeest | Design and politics by Henk Ovink | We are the city makers by Vincebt Ocalsa | Stop building! by Bart Peters and Sebastian Ropers | Urban propaganda by Justin McGuirk | City Marketing by Robbert Nesselaar | The art of making slogans with Jenny Holzer | On the realization of collectivity by Ekim Tan and Diana Ibáñez López | Building without Bureaucracy by Finn Williams, David Knight and Ulf Hackauf | The reality of virtuality with Mark Shepard | Pixelpower by Winy Maas | A déjà vu by Nacho Velasco and Isabel Pagel | SanOma/OmaSan by Winy Maas | Open up. Embracing Uncertainty by Paul Hughes | Will you dare to? by MVRDV | Scale-less #1 by Johannes Schele | Scale-less #2 by Peter Root | Visual communication with Paul Mijksenaar and Herbert Seevinck | Drôles de plans | weaponofchoice by Marick Baars and Hugo van den Emster | Architects are becoming more and more deskilled with Rory McGowan | Moi, je construis by Andre Kempe and by Marte Marte Architects. | Nothing is more necessary than the un-necessary by Farshid Moussavi | Due yesterday! The regime of the deadline | Slogans for survival by Wieden + Kennedy | The co-authorship by Dominique Alba, Dimitri Boulte, Gaëlle Maidon and Bertrand Schippan | Who is responsible? with Mariana Idiarte and Antonio Tena | Confessions of an architect by Clélie Protière, Flore Raimbault and Noa Peer | The reality filter by Luxigon | Why do you do it? with Alain de Botton | Careers paths by Diana Ibáñez López and Sabina Favaro | The quitters with Hugo Sanchez and Basurama | The making of architects with Marc Angélil and Wytze Patijn | Coming soon with Mick van Gemert, Tanya Martinez Gonzales, David Koezen and Ahmet Korfali | Stay ahead! with Li Edelkoort | Planetary deadlines by Johannes Schele and Maciek Grelewicz | Calling all visionaries! | News 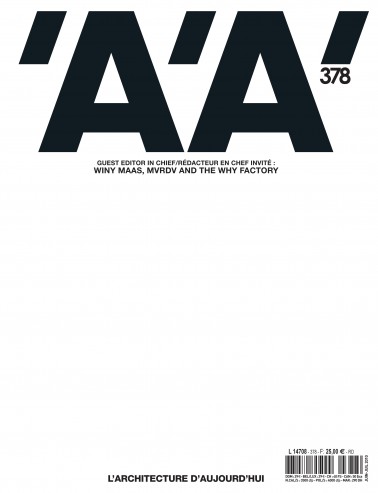