This studio was part of the Q3 R&D studio of the Urbanism track. The general assignment of the studio and it’s location Harlemmermeer were extended with the brief to include food production into the urban planning strategy.

Local food in all its variations is a topic, which is widely discussed by designers and planners all over the globe. At the same time, todays global food system it is a very complex. The ecological effects of processing (water consumption), transportation (emissions) and storing (energy for cooling) are difficult to oversee and large food companies don’t publish their data easily. However complicated the topic seems, it is well worth researching whether an alternative to todays food system is possible.

To deal with the complexity of today’s food production, we created an alternative model. We looked into todays average food consumption (based EU data) and existing farming techniques to quantify, how much space would theoretically be needed to provide a whole city with locally produced food. The Food City, which we are creating, is not necessarily a plea for autarkic cities. It is rather meant as a research setting, an ‘urban laboratory’, where we can observe and illustrate the various effects food can have on a city. In this studio, a number of parameters for such an exemplary Food City were fixed (size, population density, agricultural surfaces). This resulted in a number of alternative cities, which explore topics as distribution versus concentration, exposure versus efficiency, water management, waste systems, transportation and trade. By designing a complete city based on food, we can illustrate the consequences and possibilities future food production will have. 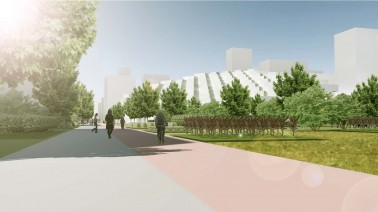