In collaboration with The Why Factory and MVRDV, 25 students from five different cities across Russia gathered for a four-day workshop (May 14-18, 2018) to fantasize and produce visions of the future of the city of St Petersburg.

Considering major contemporary urban problems of the city, a set of strategies was developed on five different sites, including areas both outside and within the UNESCO heritage boundary. Students have conducted a basic calculation on the population growth and increase of housing demand within next ten, twenty-five and hundred years. This was then translated into an amount of extra volume that the city will need to accommodate. Alongside with this index, a series of housing typologies (towers, blocks, slabs, …) was established as a catalogue of fundamental ingredients of future urban form. In addition to extra volume, those typologies often favour urban qualities that are crucial for successful development of the city – connectors, for instance, help to establish links between relevant locations, extruders allow for the preservation owf historic monuments and so on. Working in teams of five students per site model, students created -out of foam blocks- a number of visions at a scale of 1:500. During the next days, the build-up of visions was photographed as a sequence of still frames and then processed into a time-lapse movie. During the last day of the workshop, Professor Winy Maas gave a master-class, during which, based on videos and models produced by the students, the visions were reviewed and evaluated according to their relevance and their ambition. Each vision was imagined at a citywide scale, taking into account a variety of spatial conditions that can be found on the given sites. These spatial conditions include the relation of the new typologies tothe bodies of water, the area within the UNESCO heritage perimeter and or the brownfields in the preiphery.
The models in this room embody the first approach to the complexity of Saint Petersburg by resolving specific sites and were realised during the four-day workshop. Meanwhile the matrix on the wall showcases a larger catalogue of visions for the entire metropolis that was elaborated as a result of the discussions with Professor Winy Mass at the end of the workshop. 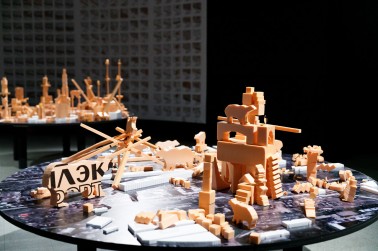 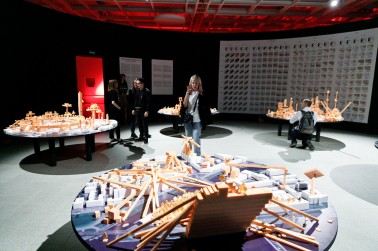