Ronald Plasterk Minister of Education, Culture and Science will officially open on October 15 the new think tank ‘The Why Factory’ at the Faculty of Architecture at the Delft University of Technology and the structure it occupies, an orange Tribune designed by MVRDV. The Why Factory, an initiative of Delft University’s Faculty of Architecture and MVRDV, researches urban futures and is lead by Winy Maas. During the opening event a series of prominent speakers will discuss the future city and Winy Maas will give his inaugural address as professor at TU Delft.

After a fire destroyed their premises, The Why Factory and the faculty of architecture of Delft University moved into the former main building of the university. An interior courtyard was created and designated as the new residence of The Why Factory. MVRDV designed the three floor tall wooden structure, containing lecture halls, meeting rooms and the premises of the research institute. An auditorium stair climbs to the top, literally putting the students on top of their teachers.

The structure distinguishes itself by its bright orange colour which clearly identifies The Why Factory as an independent research centre within the Faculty of Architecture, Delft University of Technology. Furniture designer Richard Hutten designed flexible furniture to allow the space around the tribune to switch function between research hall, lecture hall and exhibition space.

My Future City event 15 October
Opening and inauguration of The Why Factory and the Tribune by Ronald Plasterk, Minister of Education, Culture and Science and Rector Magnificus Professor Jacob Fokkema. After the opening invited speakers will state their dreams, definitions or predictions of the future city: 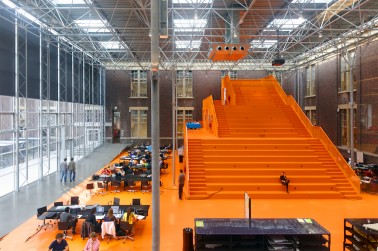