Hong Kong Fantasies – Challenging World Class City Standards
What does it take for a city to become world-class? And who decides? It’s not enough to look at a city’s economic performance. Great cities have always offered a more fundamental, abstract quality – a quality that no single ranking system has yet been able to measure. This book tries to define that quality, and to introduce a universal standard for its evaluation: The World-Class City Framework – WCCF. The Why Factory fantasizes that Hong Kong, a city struggling to hold on to its reputation, makes a spectacular comeback as an exemplary world-class city.

Vertical Village – Individual, Informal, Intense
For centuries, the fabric of East Asian cities has been formed by urban villages that are built up of small scale, informal, often ‘light’ architecture. These urban villages form intense, socially connected communities where strong individual identities and differences are maintained. Driven by demographic and economic forces, these cities are now rapidly changing. Massive towers, slabs and blocks with repetitive housing units, floor plans and façades are scraping away the urban villages that have evolved over hundreds of years. The Vertical Village proposes an alternative to this growing monotonous sea of blocks. In the Vertical Village, a planning software is proposed which supports the evolutionary bottom-up grow of the villages in a dynamic way as no masterplan could provide it. 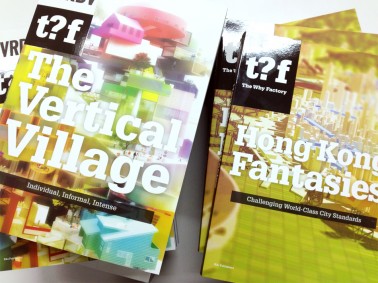