The Why Factory runs research projects, which are positioned in a classical research tripod of models, views and software; of model cities, applications and storage. The research on the Future City is undertaken through the interactive composition of three fields. It speculates on possible theoretical models in the model city program. It makes counter proposals for existing cities. It stores its knowledge through an evolutionary gaming program.

Model Cities Program:
Model Cities concentrates on the conceptualization and modeling of cities, each within its own limited set of parameters that allow for maximal exploration of a specific subject in order to engage with possible futures. The Model City Program theorizes abstract cities and translates them to physical models to explore spatial qualities and quantities, potentials and limitations. T?F seeks for a refined combination of ‘science’ and ‘fiction’ in order to bring our dreams and desires closer to reality.

Applications Program:
In the applications program model cities both are tested in real cities. The different models become counter proposals for existing cities. T?F collaborates with local institutions to test different hypotheses and discusses them with local governments and citizens.

Software Program:
How can we store all the information that derives from the model city and applications programs? Can we create a library that is not only passive but can behave actively? Maybe we can store knowledge in gigantic software, an evolutionary game, that not only collects data but also positions them and makes them visible, comparable and in the end even productive? It combines the role as a ‘library’ with the one as a ‘connector’ or a ‘communicator’ and even ‘generator’. It becomes a ‘city’ itself; an evolutionary city; a data cloud. Such a tool combines the more collective agendas with the individualistic tendencies of the current societies; a developing series of ‘urban software’ is imagined. 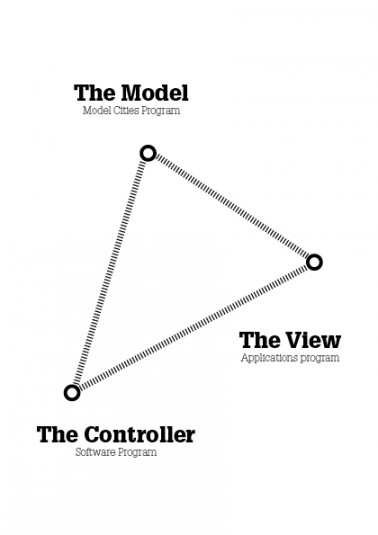