What is a vision? Winy Maas gives his view on the need for and potential of visionary thinking in architecture and urbanism.
This text has first been published in the Why Factory's first publication Visionary Cities in 2009.

What is a vision?

A vision is, in a way, what happens between a question mark and a proposal. It asks the big questions and then paints an image for the future with its answer. Most importantly, it is a dream for the city and for its spatial translation that offers a long-term, cohesive, seductive, and strong perspective for future societies. It is part curiosity, part exploration, part fantasy, and part real problem solving. The role of the visionary is to guide, and direct and summarize the course for this increasingly urban world.

Why do we need one?

As you see in the urgencies outlined in this book, it is time to begin thinking about our cities in a completely new way. The urban environment is fundamentally different than it ever has been before, but we are still trying to physically define it in the same way. We don’t know how to move forward because we are caught in a splintered reality. We see a strange contradiction. On the one hand cities and communities are highly individualistic and enormously based on the individual unit, and on the other hand global awareness has come to life more than ever before.

We are seeing, like never before, that people are able to survive in almost self-contained cities. The pure individualism afforded by relatively new technologies such as television and the Internet have challenged the necessity of the city as a place for exchange and for access to particular experiences. You can live anywhere, you can work anywhere – every farm in Switzerland with a bit of technology can house the world’s best workers and activities that in the past were limited to the classical city. Some people say that the city does not even exist anymore.

At the same time, we are also seeing that the planet is collectively being conceived for the first time in history as ‘a ball’ – as one entity, one continuous place. Because people can travel farther and more often; because the population is mixed and has been crossmingled and is not connected anymore with a country; because the monitoring of the planet has become more apparent and because crisis is almost always global.

Diseases like this H1N1 Virus, or the financial crisis, or the climate crisis are everywhere – they are no longer just local. Every point on the globe is much closer for everybody than it ever was before. The spaces in between the classical cities are used for urban agriculture, industries, housing and leisure. The Mont Blanc is busier than Trafalgar Square. Whatever we do in a city – whatever city – has effect on that city’s exchange with other cities, and has a wider effect than ever before. In this way, one might argue that the city is everywhere; that the world has become one big city.

To me, these two extremities describe the need, from both ends, to bring them together into possible constructions, and those constructions are probably describing the word vision.

So why don’t we make one then?

Unfortunately, this need for vision comes at a time when we are reluctant to even use that word – vision. There are some people who say that they have a vision, and if it’s Al Gore and his perspective on the environment, or if there are a certain kind of religious leaders that have a particular vision of how the world should be because of their beliefs, we are sceptical of their visions because, in the worst case, they can be too extreme, too holistic, too narrow-minded or too exclusive. If at times we are anxious about visions because they are small, we are equally afraid of visions because they are big. They are (again in the worst case), top-down, bureaucratic, politically motivated projects that take too long, cost too much, and never fail to provide us with reasons to criticize them. The faults of these large-scale efforts feed our cepticism towards the collective and towards governments and bigger planning as well.

Instead we have developed a different kind of planning. A bottom-up, agent-oriented planning where small special interest groups are represented by agents who advocate their demands. It has become the time of the NGOs. In the same way that we are able to sustain ourselves in our private cities, catering only to our own needs, we expect city planning to do the same. A new level of economical, cultural, societal richness has lead to a certain kind of protectionism. We are happy with what we have and we want to hold onto it. We are also in a position where  we are entitled to protest and to resist more than before. As a result, more and more plans take much more time to realize. It they even are realized. In Switzerland the average realization time for a building has risen to eight years. In the Netherlands highway realizations can take more than 20 years, the extension of the A4 for example. These developments paralyze the evolution and growth of the city. They frustrate, if not kill classical urbanism.

Another part of it has to do with the loss of differentiation. With more and more global markets for architects, with the greater communication and sharing of image production, one can see much more similarity, much more copy-paste architecture, less classical uniqueness between architects. In recent architectural biennials it is clear to see that everyone’s work is very similar to everyone else’s, that the uniqueness of the architect is disappearing.

At the same time there is now a tremendous pressure on architects to make the unexpected, by clients, by developers, by politicians, who seek, for economical and electoral reasons, ‘difference’. We are expected to be fantasy makers, and even beyond that to make something that is beyond all the fantasies that have come before and this intimidates many of us. Actually, architects are quite behind in their  imagination of the future. It is a huge risk to look forward into the unknown territory of tomorrow. The fear of taking ownership of an idea so big and so unknown has become much more predominant because of the conditions I have described. In the time when we most need a visionary, it is in many ways the most difficult time to be one.

First, let’s uncover a collective ambition, a wider goal. We need to ask ourselves if there are bigger issues that affect our individual lives, and if so, how we are going to tackle them, on our own, or with a bigger group? Thus the collective appears immediately; urbanism is there. And what we can notate now is that the collective space may seem completely different, but it has always been there. It is there by the desire of people to organize traffic, or to organize safety or to organize food products or organize medicine. There is a huge tendency, even reflected in the market, that describes a huge collective desire. The intriguing thing now is how that kind of desire effects individualism, and how it affects our cities, and if that will lead to other kinds of cities, and if that will lead to other kinds of organizations, and so on.

It becomes visionary again, when you can begin to paint, in a spatial manner, what the world will be like or should be like in order to improve that balance between the individual and the collective, and then how our cities can accommodate that and turn that into projects.

The role of crises is highly useful in that. We need to embrace crisis as an agent for change. Disasters can be extremely useful. They create urgencies for us to react to, they generate energy for us to invent and innovate. Maybe instead of waiting for disasters to react to, we could accelerate problems and use them as a motive for forward movement. It’s apocalyptic planning in a way. If there is a neighbourhood with a really bad traffic problem, let’s make it worse. Let’s dedicate that neighbourhood to be the biggest traffic jam on the planet for the next five years. I guarantee that you will end up with a better solution and more money out of that than if you were to do it a conventional way.

Most importantly, architects need to start looking forward again. That’s the thing about architects: they believe in construction and therefore they are always about hope. Even the most cynical architect on the planet cannot deny that his or her architecture is constructing alternatives and that no matter how small they are, how modest they are, how local they are, even how mediocre they are, they must have an ingredient of optimism. We need to take that optimism and reclaim the future of our cities.

Yes, let’s act. Formulate your position, decide what you want to do, and then do it. Some can do it with words. Some can do it on a small scale and bake bread or visit people in a hospital. Some of us can act directly on the urban environment. Whatever you do, get to work and do something about it. 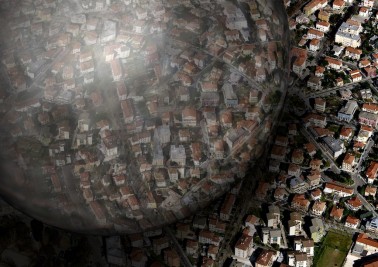